At 12:18 p.m. today, three years after the sudden and unexpected closure of Clark Foam, Grandpa Gordon “Grubby” Clark announced that he has literally “shut down” the ocean. The statement arrived via fax machines at entities as disparate as NOAA (National Oceanic and Atmospheric Administration), SIMA (Surf Industry Manufacturer’s Association), Gov. Schwarzenegger’s office and the White House.

The fax claimed that “any swell now in the world’s oceans merely represents resonant storm activity, and the ocean will go completely flat in 7 to 10 days time.” Much like the cryptic fax of 2005, which caused upheaval throughout the surf world, the statement contained no explanation for the seemingly chaotic, and mean-spirited decision.

While pundits argue how such a feat could possibly be attained, those close to Clark’s former operation insist that his claims must be given credence. News of the ocean closure rippled through Congress as well as the nation’s scientific community today, yet first to take decisive action was Billabong USA’s C.E.O. Paul Naude. The South African surf industry magnate sent big-wave riders Mike “Snips” Parsons and partner Brad Gerlach into the deep sea, abreast their jet skis, with a mandate to quickly discover the source of the cloggage. Gerlach reportedly surrendered a spot at a casting call for “Gossip Girl,” to take up the challenge. Parson’s wouldn’t cease preparation for even a moment to comment on the unprecedented adventure.

“Bru, this mandate outweighs the Billabong XXL awards exponentially,” Naude said. “How can we be expected to support Andy’s rehabilitation without surf affiliated T-shirt sales?”

Meanwhile, Surfline.com’s Sean Collins is said to have attained a portion of the recent $700 billion bailout package. The funds were intended to advance his work with the wind turbine industry in an attempt to create “subscription-based” surfing. According to insiders, the technology allows Surfline.com to focus a wave, within three meters, at any given subscriber (but only for “premium members”).

“Without this wind turbine thing, surfers have no hope of hitting a lip anywhere,” a source close to Collins said. “He’s finally found a way to corner the market. We anticipate he’ll acquire Baja California at any moment now. He’s setting himself up to be the new ‘Grubby Clark.'”

Critics of the real Grubby Clark remain confident in the opinion: “Still piping hot he wasn’t able to squash all of surfing in 2005, it appears that he’s finally cemented his legacy.”

At the very least, say many shapers, it will ruin another Holiday season for surfboard craftsmen everywhere. 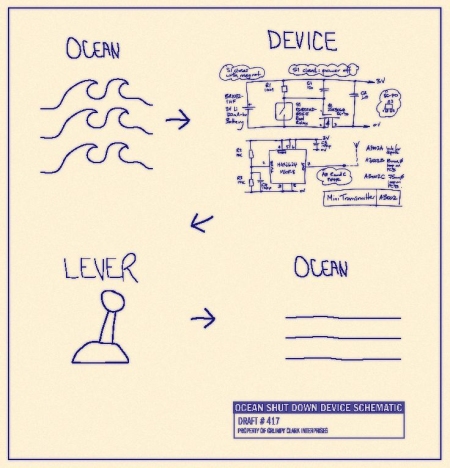 Schematic used in engineering the Ocean Shut Down Machine

This entry was posted on Saturday, December 5th, 2009 at 11:34 am and is filed under Uncategorized. You can follow any responses to this entry through the RSS 2.0 feed. You can leave a response, or trackback from your own site.