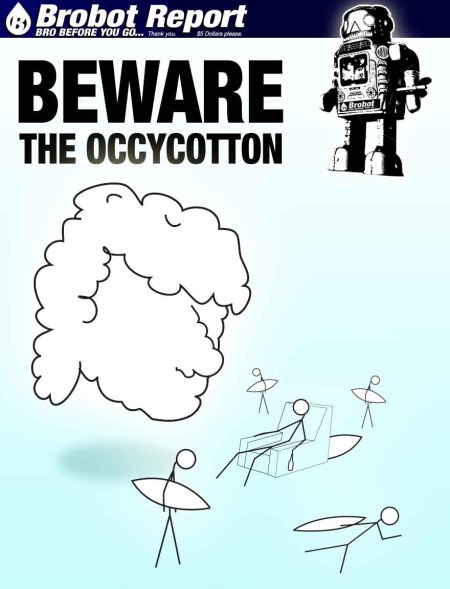 Brobot Report
Occycotton: a scourge on the Association of Surfing Professionals

According to an ASP watch-group, an insidious drug has invaded the ranks of the top 44. The powerful “Occycotton”—thought to have seeped into the professional surfing tour during the 1980s before waning and rising again with a brief climax in 1999—has again reared its ugly head among the surf world’s elite. Says a concerned observer, “Like some hangover from the ’80s, it now just seems to hang around ASP events, a sick commentary on today’s competitive scene.”

In recent months top ranked surfers have skipped heats, made debauched efforts and have complained of a general “over it” type syndrome. The wild behavior has forced pundits to consider whether it’s enough for today’s athletes to be well paid, adulated and ushered from one great wave to the next.

According to an official statement, the ASP pointed out that its regulations on the use of both prescription and non-prescription drugs are focused solely on “performance enhancers.” The fact that Occycotton appears to make generally “in-form” surfers “suck,” the statement continued, does not fall into the purview of any ASP sanctions. When asked whether the ASP would confront this epidemic at all, an official who asked not to be named said, “No, because the sponsors are successfully pretending it’s not happening, and we totally support that strategy.”

The shape of this malaise, some have commented, resembles the interestingly proportioned head of famed surfer Mark “Occy” Occhilupo. Ironically, others have argued that the affected pros share similar points of contact with the revered former champ. Friends and traveling mates of the legendary goofy-foot seem to have fallen into the glut Occhilupo suffered from 1987 to 1997.

Many disagree with the allusion, however, citing that fact that Occhilupo retired in 2007 and therefore could not be the source of the Occycotton epidemic.

* In an effort of full disclosure, the Brobot must report that he “experimented” with Occycotton in the ’80s, but because he is a robot, he did not actually get “high.”

** Fully-full complete disclosure: noticing a recent upward trend in Occycotton use, the Brobot has attempted to jump “back on the band wagon,” in hopes of reaping whatever “street cred” the attempted addiction will lend him.